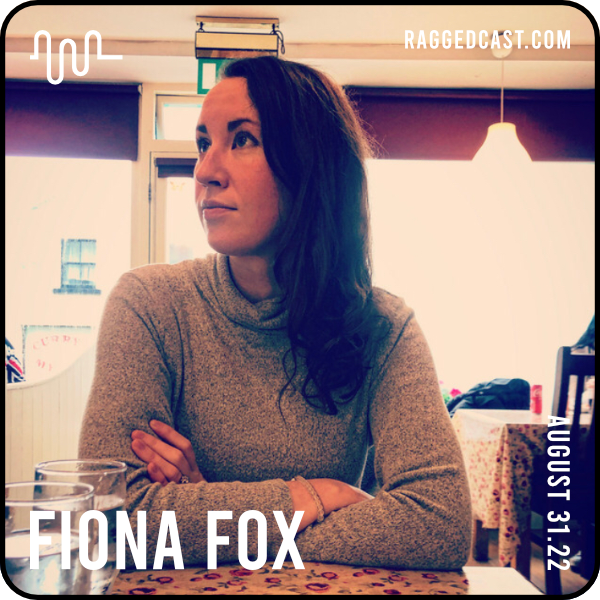 Fiona Fox is a singer-songwriter from Castlebar, Co. Mayo. After completing a degree in Music at UCC in 2012, Fox spent several years abroad in the UK, USA and Australia before returning back home to Mayo and to music. Inspired by her favourite authors, Henry Miller and Charles Bukowski, Fox writes songs highlighting the vulnerability, humour, and heartbreak of the human condition. In July 2022, Fox self-released her first EP, which features three original songs, and a haunting cover of The Killers ‘Read My Mind’. Recorded at home, the EP has been a collaborative effort with virtual contributions from friends and family in Ohio and Michigan. Fox has many more songs written and is currently working on recording new material to release a second EP.

The Smashing Pumpkins have been and remain one of my all time favourite bands and I consider Mellon Collie and the Infinite Sadness to be one of the best albums around. I remember stealing this CD from my sisters CD rack
and reading the lyrics in the sleeve and being blown away. Further moved again by the delicate and nostalgic beauty of the melody and the accompanying video, which collages together exceptionally beautiful still photos into a moving image, this song will always be very dear to me.

I don’t know what this song is about but I love it all the same. The beautiful instrumentation coupled with Matt Berninger’s deep and rich vocals really conjures up something, and while the meaning of the lyrics feels vague there
is a strong sense of sentiment that resonates with me every time I hear it. Sort of like an abstract painting, I really feel this song even though I don’t fully understand it.

This song was the first song I heard from King Krule and it struck me immediately. I feel this song so captures that restlessness and hopelessness that can accompany the teenage years in particular. Archy Marshall’s
distinct vocal delivered with grit and indifference, and the impatient unrelenting guitar riff is a fantastic combination. I come back to this song regularly and love it as much every time.

From the 1973 concept album Berlin, this song is simultaneously heartbreaking and uplifting. The instrumentation is sparse as the storytelling takes centre stage. This album tells the story of Caroline and Jim a couple that have fallen victim to a variety of vices and highlights issues such as drug abuse, domestic violence and child abuse. This song in particular addresses domestic violence between the couple painting a picture of pain that is numbed to the point that it is banal, yet also an aching hope on both their parts that things could and should be better. A distinct departure from his
previous album Transformer, I admire that Lou Reed decided to draw attention to an unpopular but highly relevant subject matter.

This beautiful song unfolds lazily with bluesy bass and piano carrying along images of solitary souls wandering through the dawn. Taxi cabs finishing up after a long night, sizzling bacon and eggs, and street sweepers cleaning up
“the ghosts of Saturday night”. This song transports me to those nights that turned into mornings, and how I so enjoy those quiet walks home before the world wakes up.

The opening song from the album of the same name, this song is a hilarious representation of a couple so full of love for one another and so full of disdain for the rest of the world. The couple in the song, sequestered off from the rest of society, spiral cynically together, and yet care for one another with an unexpectedly heartwarming sensitivity. Josh Tillman writes “I brought my mother’s depression, you’ve got your father’s scorn and a wayward aunt’s schizophrenia, but everything is fine, don’t give into despair, cause I love you, honeybear”.

My uncle used to play this song and watching his fingers move through the nylon strings of the guitar with the incredible pace required for this song was fascinating and definitely one of the moments that spurred me to learn the guitar. Leonard Cohen’s classically inspired guitar melodies and beautiful storytelling have persisted for me as qualities I would like to emulate in my own songs.

Courtney Love’s delivery of this song really hits me. I have always thought she has such an amazing range vocally - docile and sweet one moment and rabid and violent the next. I think this combination is particularly powerful
on this song, with lyrical content that juxtaposes a desire for empathy and human connection with the experience of being repetitively used and disposed of. I think the video for this song is fantastic also, a difficult watch but one that seems to echo the overall sentiment of this song and the experience of having the most vulnerable aspects of yourself devalued and degraded by others.

Chromatics – Into the Black

This Neil Young cover of My, My, Hey Hey (Out of the Blue) by Chromatics is so fantastic. I love how they have completely changed the overall atmosphere of the song, slowing it down and adding synthesizers, creating a dark and eerie atmosphere beautifully transcended by Ruth Radelet’s haunting vocals. I love to cover songs but put my own spin on them, something that Chromatics have expertly done often, so they are definitely inspirational to me. I highly recommend checking out all the artists on the label Italians Do It Better run by a member of Chromatics, Johnny
Jewel and Megan Louise of Desire.

Building an 8 minute song on a two-note descending piano melody that repeats over and over but is in no way boring, what a feat! Like the repetition of this melody, the lyrics introspectively explore the repeated psychological and behavioural patterns that sabotage Kanye’s own personal and romantic relationships to the point where he implores his partner to “run away from me baby, run away fast as you can.”