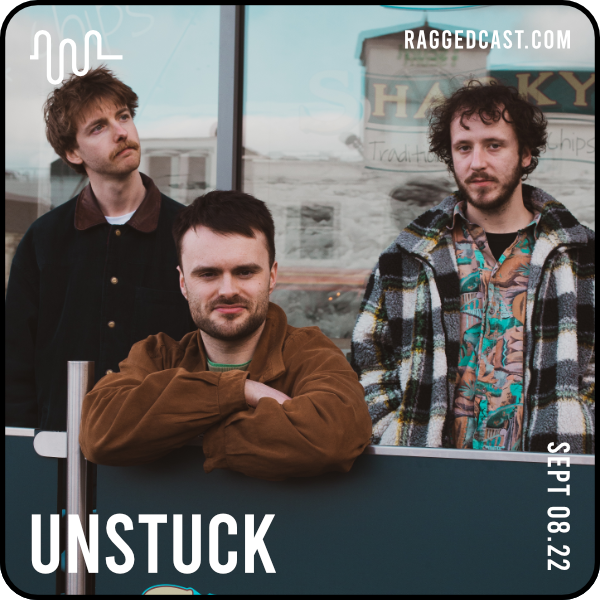 Unstuck are a rock-flavoured three-piece from Wexford with a clear mission: to make songs songs again. They value tight composition, quirky guitars and vocal harmony in their catchy, off-kilter guitar pop style. Debut single "Occupied" released August 20th 2022 is a taste of what is to come on the five-track EP the group are currently recording.

"(Occupied) has a kind of quirky, punky attitude that powers straight in, says everything it wants to say and then all of a sudden it's all over" - sendmeyourears.com

"Extremely catchy, the track brings infectious yet slightly quirky guitars to a fuzzy pop undertone" - The Other Side

"Occupied is a relentless breaking wave of frantic guitars and pounding percussion... Unstuck promise to be much more than a throwback to the amphetamine-driven sound of mid-80's California" - DeRailed

“Wavves’ bubblegum-punk of the 2010s is top shelf, but No Hope Kids from their second
album is easily their shining jewel. A genius teenage wasteland anthem that sets timeless,
unadorned lyrics against a subtly alternating progression. Lathered in thick coats of
distortion, it still glistens brighter than the cleanest summery pop you find making the charts.
My cup of tea, in my mug.” - Conor

Liz Lawrence – Down For Fun

“Generally, I baulk at recommendations, unless they are approved by a shadowy algorithm
that harvests my data and thinks for me. Spotify generally does a good job at manipulating
my brain in not unpleasant ways, and this tune is a recent highlight for me. Weird guitars,
clever construction and sub-3-minutes – the law is abided.” - Andrew

XTC – Shake You Donkey Up

“XTC are a keystone band that made us realise an important tenant; that you can create
quirky, odd and playful songs without rejecting pop songwriting conventions. Harsh angles
contrast regularly with tintinnabulating harmonies and squishy arse-pocket grooves. This
song is a bad example of that, but we fucking love it.” – Unstuck approved

Weezer – Say it Ain’t So

“Say It Ain't So was the first song I covered when I was a teenager that made me go "wow". I
love the energy and the drums on the track in particular, and it was definitely very inspiring
for me during my formative years. A classic song for a reason – it rocks!” – Dean

“Summer ‘08 is an album packed with absolute bangers, full of songs I find myself singing
and humming on a daily basis, but 16 Beat always floats to the top. It has a savage
drumbeat that lifts me up when my brain is tired. One of my favourites.” – Dean

“Stacy’s Mom is cool and all, but have you heard this song? Each section is a relentless pop
hook. There’s no deep mystery nestled inside the lyrics - they suck. This is instrumentally a
sublime pop song. People should be conscripted to listen to every Fountains of Wayne
album, they’re criminally underrated.” – Unstuck approved

Beach Boys – When I Grow Up To Be A Man

“Coming from two Beach Boys ultras (Dean doesn’t mind them), selecting a single song to
distil and articulate how influential they’ve been to us is a tall order. Mount-olympus tall. This
song is off the album directly predating Pet Sounds, and it’s amazing. It has everything.
There’ve been times we’ve listened to the final 15 seconds of this song on loop for close to
an hour while Dean listens to a podcast.” – Conor & Andrew

“Unwound are the best heavy guitar band. This song off one of their “sleeper albums” has
everything I love about them. Every turn, every phrase, is unique, creative and heavy, before giving way to delicately plucked chords. An oasis of melancholy in a desert of mank.” – Andrew

“One of my favourite bands making music on this island right now, this track is my personal
favourite off their latest EP. A perfect slice of their upbeat, punchy guitar pop style. Get to
see them live if you can to witness this incredibly well-wrought banger with your own blood
and bones. Warning: serious earworm.” – Conor

Built To Spill – In The Morning

“Mid-90’s-US-indie rock is objectively the best genre, and Built To Spill are the best band
within that genre. Do the maths, carry the zero.” – Unstuck Approved