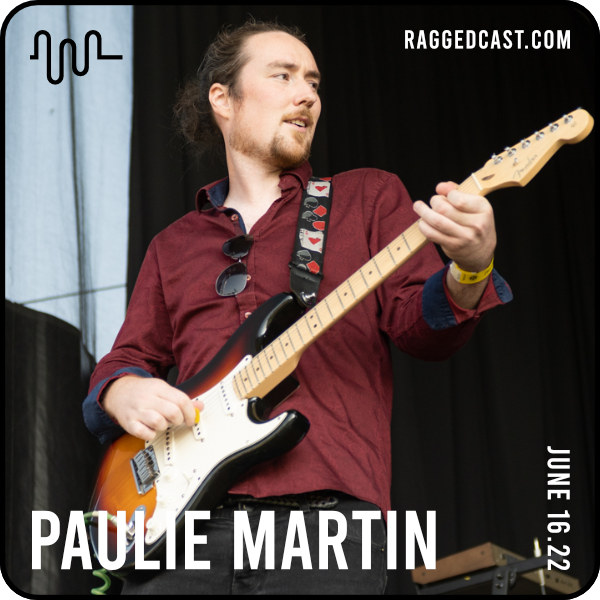 Paulie Martin is a well-established local musician based in Mullingar. A familiar face to most and a recognisable voice and guitar player to the rest. His influences range across multiple genres but his roots are in Blues, Funk and Rock. Paulie started writing and playing with original bands and as a solo artist at the age of 15, headlining and supporting multiple gigs between the two. Highlights include Whelan's Ones To Watch, Midnight Sessions, and Electric Picnic.

In 2018/19, Paulie also had three spectacular sold out gigs in the form of Paulie Martin & Friends which includes some of his bests friends and members of his covers/jam band, Tonic House Collective, at local Mullingar venues, Canton Casey's and The Stables at Smiddy's bar.

Since then, during the 'global hiatus', Paulie has been busy finishing 7 songs and counting, hitting the studio with his extremely talented 7 piece band and ready to burst with an eclectic, genre filled album full of soul, rock, funk and pop.

Currently releasing his song 'Cherokee Rose' on the 16th June 2022 which was recorded in Grouse Lodge with the help of the Arts Councils Local Live Performance Scheme in 2021.

This was my absolute favourite tune to spin on my dads old record player when I was a babóg. I'd sit holding the record cover and bop away to the chorus. It helped I was a huge fan of 90's cartoons and Swamp Thing was up there in the “top 10”... more like top 100. (it's just too hard to pick 10) I still think I'm in love with wild thing, but I wanna know for sure.

I got into Michael Jackson and haven't stopped funkin ever since. This tune is just a representation of the tunes I'd love to throw into the mix of the torturous ten. I have a playlist on Spotify called 'Movin' and it's just full of Prince, Steely Dan, Al Green, Buddy Miles. I could go for days here but I think what I'm trying to say is, if it grooves and makes you move, I'm on it. Send it my way.

Ok so, I'm taking it to heart with these 10 tunes. I fell in love with Rock through the almost obvious 'Bohemian Rhapsody', head banging away in my Dads car in near 40 degree heat, not a care in the world. I went home 10 stone lighter that day. The thing about Queen is, I'm a huge fan of Brian May, old Queen albums like Jazz, Queen 1 & 2 and more and more and more. The song arrangements are just like classical music, which I forever listen to in the car (big up Lyric FM), But then Brian May just has this amazing catchy style that bounces off your ears and grabs your attention with every note. Solo's, riffs, chords, atmosphere, arrangements, nothing, he does it all.

So this my homage to classic rock which I could go for another 10 including Deep Purple, Pink Floyd, Chicago, The Kinks, Yes... Again... The list goes on. However, Boston have been one of my go to bands for their clarity in arrangements, almost Daft Punk – Discovey style, with acoustic guitar, heavy guitar, harmonies, great rhythms, clear vocals and just overall catchy hooks. The album, Boston – Boston is just a schooling in rock and roll.

Okay, okay, it was harder to pick an album than a song in this case.... But maybe I'll go for 'Good Time Boys' because John Frusciante's playing (on this whole album) just rips it up. We have a version of Stone Cold Bush from Helium Festival on YouTube with the band Ricotta Rojo. That always takes some serious energy to play. I've always loved the early albums with Hillel Slovak on guitar, but as there are so many Chilis songs, I think it best to say my favourite is Frusciante's style of song production. I like to simplify before I get into the nitty gritty of the technicals. Simple hooks, Catchy melodies, One strum for a big sound. Darragh J. Glennon brought that to my attention when he produced and recorded our song Indian Chief

I thank the Beatles for teaching me the hard chords. This song because I have huge love for mother nature herself. I think the melody in the chords just opened up a whole new way of playing for me while teaching the D chords I call them. Just your average triads on the top 3 strings of the guitar. Been flat out down there ever since. There's too much to say about the Beatles. Hit me up up and we can have a chat.

Sublime became one of my absolute monster bands to take over my ears. I just love their punk, reggae, dub sound with serious hooks and rhythms that could change at the blast of a hat. Great songs, great melodies, and an overall great band. A power trio that became loved because they loved what they were doing. I think That's where my grá lies with these guys. There was no bullshit, just friends playing for friends.

Hendrix was a massive influence on my guitar playing for years. My solos etc. But then I started singing and listening to all of his old, unreleased, studio takes etc and came across this song. It was the first song I started singing in pubs around Mullingar with the The Random Tunesmiths on Wednesday nights. It was just a simple song, yet it means so much to me. I just wanted to play my guitar and sing, and still do to this day. It really doesn't matter if it's to a crowded room, or to the cats out in the alley way.

Hendrix is also inspiration to my song, 'Indian Chief' from his song, 'Castles Made Of Sand'. Plus, his grandmother was part Cherokee, which kinda brought me down a small path that led me to my new release, Cherokee Rose.

This goes out to a million and one things. I love a good song, a great melody and chorus. I love a bitta craic. I love cartoons. I loved Nellie the Elephant growing up. 'The head of the heard was calling' is the line that came to me when walking home from my girlfriends, now wife's house, about 17 years ago. I changed it slightly along with the pace of my walk to, 'The head of the deck is calling'. I went on to write my first song, 'Dead Mans Hand'. All thanks to Nellie the Elephant.

The Nut Rocker – B. Bumble and the Stingers

So lastly, to sum up. I love a good bop. If it makes you tap your foot, bounce or get ya movin in any way, send it on. Melody? Love it. Rhythm? Love it. I started singing when I was around 20. Dad caught me in the kitchen singing every bit of this melody when I was about 7 or 8 and waited till it was over, in awe and said, Jesus you sang that spot on. He always told me after that to try and sing something that's not there. Add to the song.

This was a great introduction to classical music, and rock music, and swing, and jazz, and blues, and air guitar and jumpin around the house like a maniac like nobody's watchin. If you haven't done that, you haven't lived. Give it a go and let me know how ya get on.